History of the Flower Mound

The Flower Mound is located at 2400 Flower Mound Road, Flower Mound, Texas, on the northeast corner of the FM3040 and FM2499 crossroads. This historic site is a 12.576-acre native Tall Grass Prairie segment of the Great American Black Land Prairie. Nineteenth century settlers named this landmark, The Flower Mound, for the profusion of wildflowers that grow there. 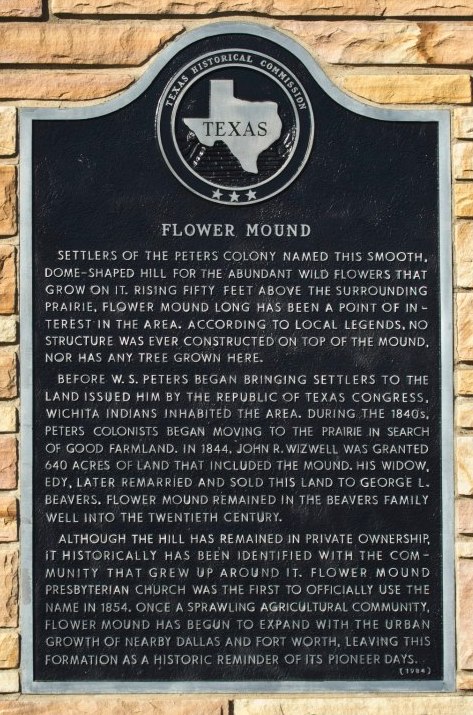 The Flower Mound is also the namesake of Flower Mound, Texas, and a town of almost 65,000 in southern Denton County about thirty miles north of the Dallas Fort Worth Metroplex.

Long time Flower Mound resident Otto Consolvo dedicated himself to preserving The Flower Mound from property development. On July 25, 1983, Consolvo and a group of dedicated citizens succeeded in purchasing the site and placing it into a permanent land conservancy under the care of The Flower Mound Foundation.

On January 11, 1984, The Texas State Historical Commission approved The Flower Mound as a State of Texas Historic site.

Early History
The Flower Mound was created some 66- to 144-million years ago during the Cretaceous Period. Once the oceans receded from this region, The Mound towered some 50 feet above the adjoining Blackland Prairie.

Myths abound about The Mound, including that it was built by an Ancient Culture or is an Indian Burial Mound. Edward Marcus had several locations on The Mound excavated by SMU Archeologists, but no Indian remains were found.

Shards of pottery dated 700 AD were found at the base of The Mound by Sweetie Bowman in the 1970s. Wichita Indians were the primary Native Americans in Flower Mound, but several other tribes lived in the area, as well.

The Mound was sacred for the Wichita Indians and possibly other tribes. Wichita’s buried their dead in sacred ground, and often in high ground. The Mound could be a resting place for some Native Americans.

Another myth is that everything built on The Mound mysteriously blows away. Early Flower Mound Presbyterians are rumored to have started building their first church on The Mound. The structure allegedly blew away and the present location east of the Mound was then selected. Other stories tell of homes and structures being blown off The Mound. Historic records don’t substantiate these claims, but it stands to reason that it is possible. The Mound is about the windiest place in Flower Mound.

The very first recorded religious sermon in Denton County was on a Sunday morning in May of 1841, somewhere on Long Prairie. Most likely, it was on The Mound. John Denton, namesake to Denton County and the City of Denton, presided over a morning sermon to Texas Rangers that were in pursuit of hostile Indians who were raiding neighboring settlers.

Bellamah deeded The Mound to the Flower Mound Foundation on July 25, 1983. The Foundation’s purpose is to keep the original character of the site and to promote educational, scientific and historical interests.

The Mound exists today as it did when the first pioneers first saw it. The Mound has never had a plow in it. The same Bluestem, Indian Grass, Switch Grass and wildflowers grow there as they did hundreds of years ago, when buffalo and antelope grazed them. It is one of the last remaining pieces of unaltered Blackland Prairie.